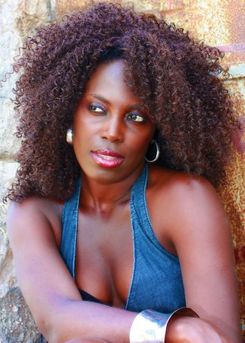 Wendy Robin is a vibrant and electrifying performer. Wendy's career as a singer and entertainer began in her native country of Dominica.Wendy later joined super group Steady Vibes in Toronto,Canada where she became a resident.The young group made two recordings which received significant airplay in Dominica and other Eastern Caribbean Islands.They also performed in New York, Montreal,Toronto and the Caribbean.
Wendy continued singing,attended University studying Biochemistry and also won two beauty pageants: Miss Dominica Ontario and Miss Black Ontario. These pageants along with Wendy's continued solo performances were part of her coming out in her entertainment career. Wendy pursued her goals of doing a bit of modeling,but her heart was always in the music industry. Wendy later recorded her first dance track a single "Ain't Nobody" on a label she helped to establish: WR Records.  Wendy later performed in South East Asia ( Hong Kong ,Singapore, Thailand ,Indonesia, Macau) for more than 5 years and brought on some electrifying performances to audiences in The Grand Hyatt's,Mandarins and Le Meridien's all 5 Star Hotels.Wendy have also performed for huge audiences of more than 10,000 people in Toronto at the Caribana events and her native country Dominica .Wendy always mixes her amazing vocals with high energy performances. She performed in most of the Canadian provinces as well as New York,Miami,Chicago,New Jersey,Connecticut just to name a few cities in the USA.
Wendy Robin has been featured on the front cover of the Richmond Hill Liberal Newspaper and was a story feature in Ambassador Magazine and again in the Richmond Hill Liberal. Wendy has received coverage in a number of other news publications and has been a Sunshine Girl three times. She was featured in Zebra calendar which is circulated worldwide, and has also been featured in a Most Beautiful Black Woman magazine, popular on the North American university circuit. Wendy Robin performed along side some of the most well known names in  music including Percy Sledge(When A Man Loves a Woman) , The Temptations (My Girl,just My Imagination,Papa Was a Rolling Stone)...etc...  Wendy later turned her travel experiences into a business opportunity through Wendy Robin Hair Collection a  business partnership with her husband Ivan Ramljak, who is also her music manager.

Wendy Robin released her CD "COLOURS OF THE SEA" in Hong Kong to rave reviews.Wendy's CD release event was quite a success with many of her fans,media and record execs in attendance.This CD is very personal to Wendy who can now add songwriting to her abilities.
Wendy 's Motto is to make sure her audiences shout and react to every song being performed and in doing so she always try to put on a show and add a different flavor whenever she and her band hits the stage.
Wendy Robin bring the same energy to her performance whether she is performing for 20 people or 20,000.
Wendy just finished working on her first Mandarin song WO DE ZHEN AI and she is very excited.The anthem "Welcome to Hong Kong" has also been released and her brand new club smash "Can't get Enough of Your Love"  have been in rotation in many clubs.Apple Daily one of Hong Kongs biggest newspaper just did a full page article on Wendy Robin and her music and achievements up to this date. 2011 so far is looking great for Miss Wendy Robin.

Wendy's first European tour is schedule to begin on Friday 2nd,December 2011 in Zagreb,Croatia.Look out for Wendy in Europe as she performs her latest tracks.
Wendy Robin current work:
Recording artist Wendy Robin just finished "Go Down Low" with Croatian super producer Sven and her remake of "Welcome to Hong Kong-Dance Mix" feat Jerald in Europe.The reviews so far have been fantastic and the momentum is building.Wendy will be kick starting her promotion of her new recordings in Zagreb,Croatia.Recording artist Wendy is now working with a great team of promoters,managers,Studios around the world(Canada,USA,Hong Kong and Croatia) personal trainer and photographers to bring her best product to the table.Along with other club favorites "Can't Get Enough of Your Love" and "Life of The Party" Wendy promised to put on some electrifying performances in Europe starting of in Zagreb, Croatia and many more European Cities to follow.
Summary:
Summer 2010 to present owner of Wendy Robin Hair collection (Black owned hair company from design to finish)
2006-to present lead vocalist and owner of Wendy Robin and Band
2002 - Present Owner of W.I.E Recruiting, ( We Inspire Entertainers Music Recruiting company)
Past Experiences:
Stage performer in Moses Revolution
Stage performer in the Star Band
Stage performer in her band Wendy Robin and the 649 Band
Stage performer in Steady Vibes Ban
Participant and winner, Miss Black Ontario Pageant
Participant and winner, Miss Dominica Canada Pageant
Back To Top
Copyright (c) 2007 Wendy Robin  All Rights Reserved